A lesson in the value of collaboration from an industry innovator with a life-long desire to make things safer and easier for his customers.

Steve Szymanski knows a thing or two about trusses. More than 34 years of experience in structural building component manufacturing – from design to sales to management – provided a solid education. He says the most important part of his time in the industry has been the opportunity to get to know his customers and really understand the challenges framers face when installing roof trusses. Those conversations sparked a passion for finding a way to make the process safer, easier, and more efficient.

“My mission was to develop a more framer-friendly solution for bracing trusses, one that framers would/could actually follow,” says Steve. “And I thought it could be done with something other than dimensional lumber.”

He knew he had an idea that could revolutionize the market, so Steve embarked on a journey from concept to implementation that has the framing industry chomping at the bit to get his product on their jobsites.

Steve recalls seeing the full-scale bracing demo at BCMC 2017, which showed that top chord bracing was not needed to adequately brace trusses and that industry prescribed bracing practices could be simplified. He remembers inspiration leading to conversations that quickly confirmed he was on to something. He started working on prototype ideas more seriously in late 2019 and, as things started to come together, realized testing his innovation had to be the next step. So he picked up the phone and called Qualtim President Kirk Grundahl.

“Qualtim was my first call because I knew they did testing and would be able to give me some direction,” Steve remembers. “It was a no-brainer, really, when you consider Kirk’s experience with BCSI and Qualtim’s knowledge of the industry and the challenges involved. It was a perfect marriage for this project.”

Steve kicked off 2020 by meeting at the Center for Building Innovation (CBI) with Kirk, Qualtim General Manager Keith Hershey, and Qualtim Sales Manager John Fredrick, to develop a proof-of-concept testing plan for what would ultimately become the Szymanski Truss Brace (STB)™.

“Kirk, Keith and John were totally supportive of my mission to make truss bracing more framer-friendly,” says Steve. “We had testing underway by July of 2020 to compare my product to BCSI bracing. The data collected in the lab then informed subsequent field tests, which John supervised.”

Despite the uncertainties of working during a pandemic, Steve says the process moved quickly: “I didn’t know what to expect, and I’m sure COVID didn’t help anything, but I thought things progressed smoothly as each step in the process moved me closer to reaching my goal.”

Once CBI completed the test report and the DrJ Engineering team provided engineering analysis, it was official. “Comparison testing indicated that an STB system was more than 40 percent stronger than a BCSI system when both systems were tested to failure,” Steve explains. From that point, it was full steam ahead for Truss Brace Solutions. 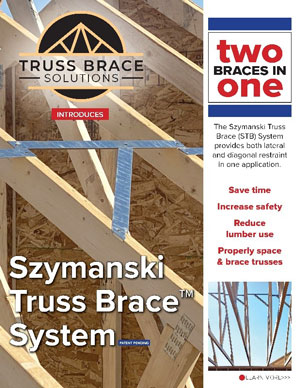 The next hurdle was how to provide clear installation instructions for framers. In March of 2021, Pushing7 partnered with Steve and the Qualtim/CBI team to develop a simple, six-step installation guide that provides framers with visual instructions for successful use of the product. In addition, Pushing7 created a one-page marketing flyer for Steve to use in his booth at BCMC 2021 in Omaha, where he officially introduced his innovation to the industry and created enough of a buzz to warrant an invitation to appear on Dave Cooper Live’s product spotlight segment in mid-October.

“I was also an exhibiting sponsor at the NFC Framer Summit in conjunction with BCMC and the response to the product was incredibly positive,” Steve reports. “It was awesome to have the testing data that shows how well the brace performs. Bottom line is that it’s predictable – not to mention easier and safer to install – and it greatly reduces labor costs.” 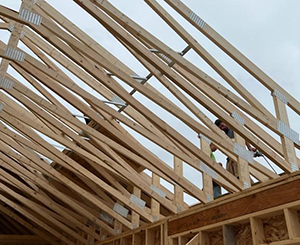 While Steve bounced ideas off a few framers as he developed the product, the real feedback started coming in after he began manufacturing the braces and got them onto jobsites. The bottom line? His product is a game changer.

“I believe this product has revolutionized the way we set trusses,” says Steve Fischer, a 30-year veteran framer and owner of Steve Fischer Construction LLC, which frames primarily multi-family projects throughout Wisconsin. “Nothing else on the market gives you the 45-degree brace – a lateral and diagonal stiffback in one product. We use it all the time, and it will be a normal practice on our jobsites. The trusses are so much more stable!”

“In a year or two, I think we’ll see this product on every single framer’s jobsite in America,” he predicts. “It braces tightly, conquers the safety issues we face every day, AND puts money in your pocket.”

As Steve Szymanski looks ahead to a bright future for his innovation, he says he’s thankful for the process and everyone involved along the way: “Qualtim’s family of companies was a one-stop shop for me. From July of 2020 to 2021 BCMC, with only a part time focus and a pandemic, I was able to go from a prototype to testing to installation guidance to marketing with the same group of people – the knowledge was all in one place. This was a big journey, and now we’re at the point where we’re actually making it and selling it – it just blows me away!”

How can the Qualtim family of brands be a part of your story in 2022?

Learn more about how our companies work together to get your innovation to market. Feel free to call us anytime at 608-217-3713. We’d love to get started on a plan!