The last 24 months have brought to the forefront a passion of mine: to visit as many industry veterans as possible. On January 28, I had the opportunity to visit Rip and Sally Rogers in Spring, Texas. Rip profoundly influenced 30 years of Qualtim staff work. He had a clear vision for the mission of the truss industry association. He left a considerable impression on my professional and personal life, and it was good to be able to say to him directly how much he has meant to me, how many he has touched, and how our group feels about him.

As a personal tribute to Rip, what follows are a few highlights of Rip’s memorable and significant contributions during his 25 years of serving on the truss industry association’s board of directors.

As the Component Manufacturers Council, the truss manufacturers’ association was originally part of the Truss Plate Institute (TPI). This made sense because the TPI companies were essentially franchisors in that they supplied three key intellectual property (IP) items: metal connectors of lumber, truss engineering, and equipment for truss manufacturing.

When discussing the catalyst for WTCA, Rip’s favorite phrase was, “the tail should not wag the dog.”

Rip began his career in the truss industry with Charlie Barns. Around 1972 Charlie Barns and Dick Rotto teamed up and Trussway was the result. Rip became Executive Vice President of Trussway and, until his retirement, was Trussway’s executive representative for WTCA. While he knew his most important role was to serve Trussway’s best interests, he also realized that his association board member role was to set aside any competitive issues and make decisions that served the best interests of the entire truss manufacturing industry, small and large.

Given the franchisor origins, Rip recognized that having a resolute independent truss manufacturer voice could cause dissonance between Trussway and its key suppliers. He understood that the role of the association and its staff was to take the slings and arrows of various agendas – seen and unseen – where a knowledgeable, passionate and unwavering organization would serve the best interests of its members well.

In addition, he understood the membership was made up of individuals whose primary expertise was manufacturing. He also appreciated that the highly sophisticated, engineered product being manufactured relied upon the expertise and intellectual property of TPI members, whose responsibility was to protect their business and association’s best interests. 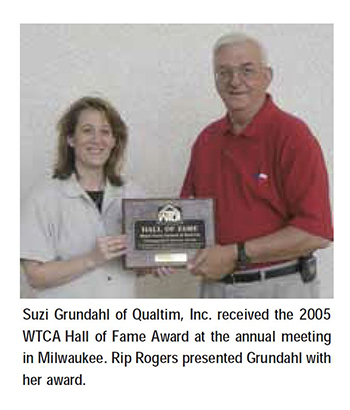 Rip was a great support system for Qualtim staff. He was a mentor who ensured that staff was firmly aligned with the association’s mission. He knew that knowledge was the power that leveled any playing field. He coached staff by providing information depth and reasoning, so each could advance the best interests of all types of truss manufacturers. He provided positive moral support in an environment where adversarial chatter was often a tool intended to manipulate or shape the core WTCA mission.

When Rip spoke, everyone listened, as his words were grounded in truth, common sense, and good humor. More often than not, when the congregation of association board members got off track, two sentences from Rip would result in a crucial and positive course correction.

Intent on treating others the way he would like to be treated in all his business and association interactions, Rip was a man of compassion, integrity, honesty, intelligence, wisdom, fairness, and calm. He often said that every business needs to make money, and there is no mutual benefit when one party causes another party harm. Where there is unfair treatment, there will be a trail of fractured relationships. Because of his character, Rip has enjoyed a lifetime of mutually respectful relationships.

Beyond all of these foregoing qualities, Rip’s love of the truth of scripture is illuminating. To witness Rip’s role in the genesis of the BCMC Christian fellowship breakfast, in 1989 in Jacksonville, was a lasting encouragement on the profound effect of the Word. Over the years, our small Jacksonville group consisting of Rip, Bill McAlpine, Tom Manenti, Buddy Showalter, and Staton Douthit, grew to a large and valuable BCMC gathering, proof that reflecting on and embracing truth is a seed that produces valuable fruit.

One of Rip’s favorite Proverbs was 16:31: “Gray hair is a crown of glory; it is gained in a righteous life.” When you look at his picture you quickly understand why!

Rip is an amazing human being who affected each Qualtim staff member in his special way. He has our most sincere thanks and appreciation, which are not big enough words. Beyond this, he was a brother I never had, a mentor who fostered passion and knowledge, encouraged steadfast independence, and was iron that sharpened iron. He was and still is the man who to me best represents the greatness of an ethical, discerning, and independent association.

Rip, thank you so much for allowing us to know truth, honesty, and greatness in our lifetime! We love you.

See All News   Learn About Our Family of Brands